I recently watched a VICE documentary (video imbedded below) about a card game that I used to be seriously addicted to – Magic the Gathering (or MTG).  MTG is a collectible card game that uses language, tactical combat, strategic elements and luck to provide for a massive gaming system; totaling thousands of cards with beautiful fantasy themed art.

Even though it has been around for more than 20 years, Magic the Gathering continues to be the most played tactical card game; with players from all over the Earth competing in tournaments.  Many collectors of cards play in a style called vintage because they want to play with all of their old cards, not just the current tournament sets.

In 2005 I designed a deck that was cheap to put together, but highly effective against just about any opponent while also being easy to play.  I call this deck Crusaders because it is a mono white deck which requires only a little mana/land and does a great job limiting your opponent’s own expansion.  It is also cheap to buy/assemble, as there are few rare cards involved. The idea with Crusaders is to get out small (but cheap and powerful) creatures that are hard to get rid of and protect you and other creatures from targeted spells.  Meanwhile, enchantments such as Crusade and creatures such as Pianna Nomad Captain buff up your front line.  Cards like Oblation, Armageddon and Swords to Plowshares help control the pace of gameplay. By turn #4, we have many complimentary, hard to get rid of creatures in play with an Armageddon in our hand.  This can be used to remove all land from the game after perhaps Swords to Plowshare gets used on a powerful creature of his.  In this scenario, I would probably play Armageddon on a later turn once I had 2 plains in my hand. 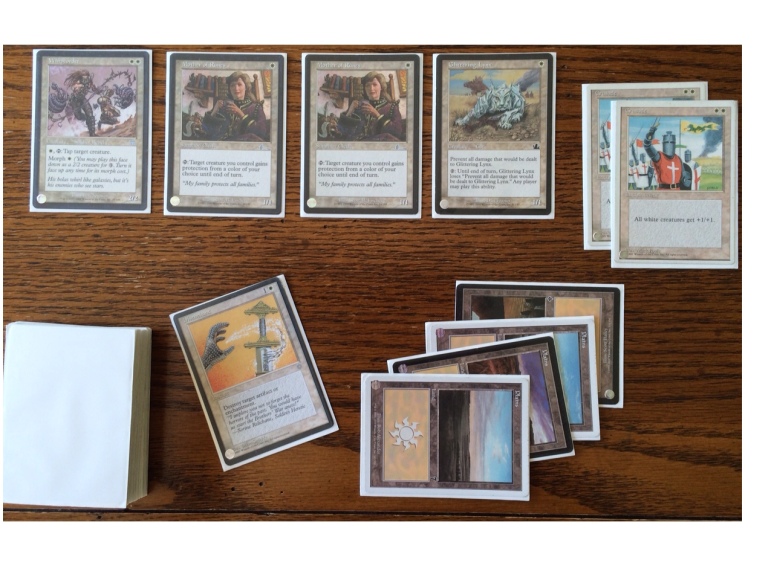 This time around, on turn 4 we have four powerful creatures in play (4/4 Whipcorder, two 3/3 Mother-of-Runes, 3/3 Glittering Lynx) and a disenchant in our hand.