Welcome to the Prometheus Rising Wiki.  Below is the first page of the quest book which describes your quest as well as the whole quest tree.  You cannot see most quests in-game until you unlock them through a system of progression.  Prometheus Rising uses a system called Hardcore Questing Mode, which starts the player with 3 lives and awards additional lives for completing quests.  If you happen to lose all of your lives, your save game will be erased forever; so be sure to work on the quests as soon as possible as they will also teach you how to survive the hostile environment of the moon LV-223 (Varda).  Varda is located more than 39 light years from earth and that requires the use of a faster than light (FTL) spaceship, such as the one you serve aboard- as the ships science officer.

(above: first page of quest book.  below: all quests shown) 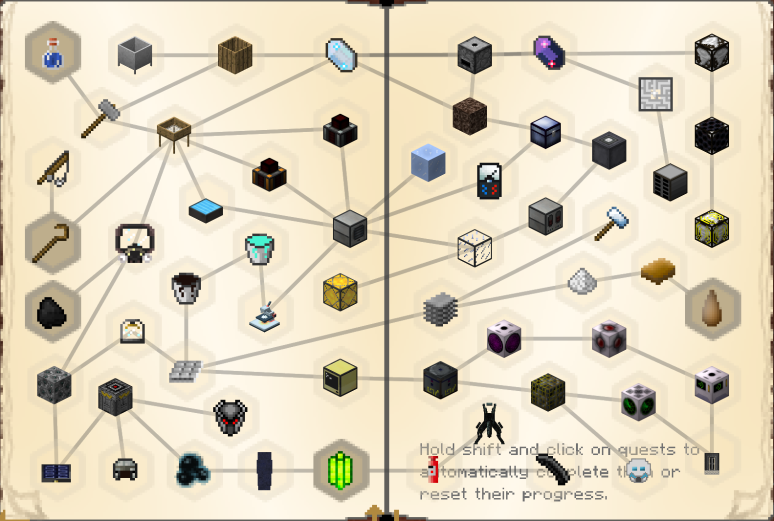 As the ships civilian science officer (and crew in multiplayer or LAN), you are adept at many sciences including chemistry and computer science.  You as the player must learn and use these sciences, and many more, to survive and eventually escape LV-223 (Varda).

As you complete each quest and its associated tasks, you will be given a choice to receive either a partial heart (life) or an item.  Most of the time, it is wiser to take the hearts; but sometimes you will want to take the item reward for one reason or another.  For instance, if you like the idea of making your own village of humans on Varda; you would want to take the villager spawn eggs reward for the quest called “Let There Be Light!” (Lumium crafting quest) instead of the 3/4 heart.  In the same way, Earth animals don’t spawn on Varda so you will need to either take the spawn eggs as quest rewards (once you reach that quest) or try to discover alternate ways of creating those Earth resources.