The new expanded version of Entropy* has been in play testing.  There are now 110+ mods in Entropy, with some additions that I am sure you will love.  Our testing team has concluded testing and recommending item/gameplay balance changes.  There are now two versions of Entropy to choose from; Lite (recommended) and Deluxe (latest version).  Lite is for slower computers or computers that have problems with Optifine.  Deluxe version has shaders and sound filters.

*BACKUP YOUR SINGLE PLAYER WORLDS, this version of Entropy breaks your existing maps.

Thanks to the following players for testing:

salem123412, Krole69 – now Entropy Moderators with /kick and /ban capabilities to help police for idiots.  They cannot cheat though and are regular players without game-altering powers. 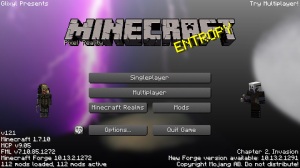 Many blocks and items have had their recipes removed or have been disabled to fix glitches.  I hope that you have a fair and balanced gaming experience when I open the server tomorrow.  You keep your money and clans from the last map.