In the tradition of delivering content over the holidays, here is Aliens vs Predator: Prometheus Rising on the Technic platform.  AliensVsPredator.org and Glixyl.org have teamed up to bring you the most terrifying sci-fi horror experience for Minecraft ever conceived!

Please give the mod pack a +1 like.  We have spent many months working on Prometheus Rising and would love for it to trend like last Aprils’s #1 trending mod pack in the world 7 DayZ to Mine did! 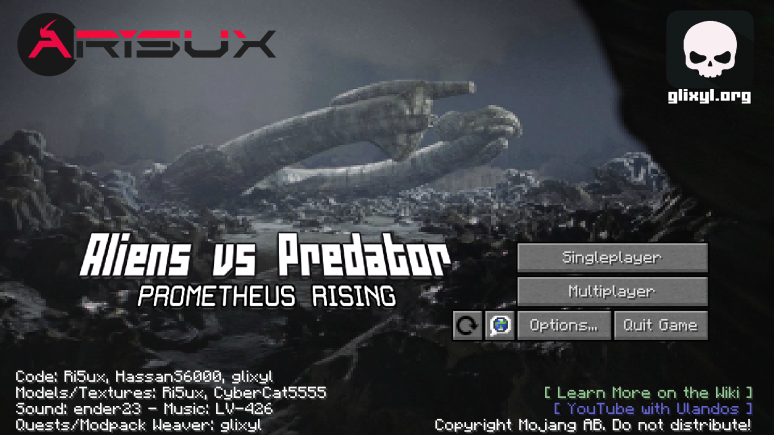 As the ships civilian science officer (and crew in multiplayer or LAN), you are adept at many sciences including chemistry and computer science. You as the player must learn and use these sciences, and many more, to survive and eventually escape LV-223 (Varda).

As you complete each quest and its associated tasks, you will be given a choice to receive either a partial heart (life) or an item. Most of the time, it is wiser to take the hearts; but sometimes you will want to take the item reward for one reason or another. For instance, if you like the idea of making your own village of humans on Varda; you would want to take the villager spawn eggs reward for the quest called “Let There Be Light!” (Lumium crafting quest) instead of the 3/4 heart. In the same way, Earth animals don’t spawn on Varda so you will need to either take the spawn eggs as quest rewards (once you reach that quest) or try to discover alternate ways of creating those Earth resources while on Varda. 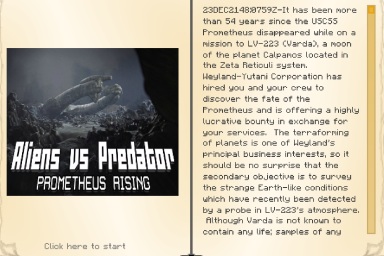 Hydration – the water on Varda is not fit for drinking and must be purified through boiling in a furnace or cauldron. A Camel Pack may be crafted as a way of staying hydrated long-term.
Air Quality – the air on Varda is only breathable while in the vacinity of trees with leaves. While mining, you will need to craft a Respirator and air filters so that you can breathe for long periods of time underground. Another alternative is to carry logs and leaves with you and set up ‘breathing stations’ underground while mining. The use of torches, furnaces and the proximity to lava will also quickly deplete air quality in an area.
Starvation – food on Varda is scarce, so you must quickly master the art of fishing or quickly develop agriculture. Fishing is actually the quicker route, which the quest called “Teach a Man to Fish” will illustrate.
Monsters:
Hammerpede – snake-like creatures typically found close to the Engineer’s Ampules and the mysterious black goo
Protomorph (Deacon) – originally the product of an Engineer impregnated by a Trilobite, these monsters are very fast, can climb vertical surfaces and charge at you
Trilobite – can climb vertical surfaces like a spider and has a leaping attack. watch for these things dropping down onto your head from above
Deacon Shark – there are rare ores and fish to be found in the watery depths, but beware of the creatures that hunt there; for they might think of you as dinner
Yautja (Predator) – deadly and fast, these hunters want your head as a trophy. if you show them submission though, they might let you live.
Beserker Yautja (Mr. Black) – a boss Predator
Engineer – mysterious beings that were the reason for the Prometheus’ original mission
Space Jockey (Engineer with space helmet)
Weather – High wind, hail and tornadoes are to be avoided; but do not destroy blocks. Be careful as a strong gust of wind can carry you away or smash you against the rocks.
Silica Storms – once every morning a silica storms happens in this vicinity of Varda. Take cover to avoid getting hurt.
Resources:

Varda Trees – trees dot the landscape and produce wood like regular trees would
Geodes – geodes are found everywhere on Varda and contain valuable minerals, as well as the mysterious black goo
Copper – most commonly found ore, located at all altitudes on Varda
Bauxite (Aluminum) – commonly found ore, located below 96Y
Silicon – found only below 48Y
Lithium – found only below 48Y. After refining, lithium becomes unstable
Earth, Nether, End Resources – Earth resources such as redstone, gold, lapis and other materials can be gained by using a sieve (follow the quest book) by sifting materials such as dirt, gravel, sand and dust. Craft a Hammer to crush cobble into gravel, gravel into sand, sand into dust. Sift the dust for rare resources, or use it to create new materials in a composting barrel.