TESTED ON MACOS, Windows 7 (3 computers).  THIS SERVER IS NOW THE ACTIVE SERVER AND ONLY PROGRESS HERE WILL BE RETAINED.

The permanent server is up at 25567.  A copy of the world from 6:00pm on March 20th is in place with all your existing equipment and machines.  We now have the addition of a bunch of craftable and customizable aircraft, jeeps and tanks to build from the resources you have gathered so far.

Planes mod, Vehicles mod- http://www.minecraftforum.net/topic/182918-11-123smp-flans-mods-planes-ww2-guns-vehicles-playerapi-moods-mputils-teams/#Vehicles  — Flan will not be releasing Vehicles and Planes for 1.2 since he is now rewriting the mods for a future release.  If we want vehicles and planes, this is our only chance to do that for quite some time.. I suggest taking the plunge and having some fun.  You have to use the KEYBOARD controls.  Also, make sure to only use the Plane Workbench to construct the planes.  Check the recipe on the web page for the exact method to build the planes. 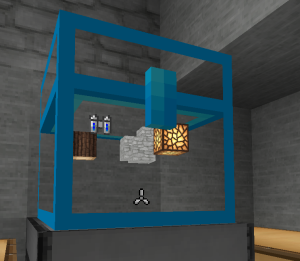 Iron Chests mod was added, which is a former IC2 mod and a nice way to display blocks in the upgraded Crystal chest (shown above and requires upgrading from copper through diamond to crystal).  Interacts with BuildCraft and IndustrialCraft2 objects> http://www.minecraftforum.net/topic/981855-123-forge-sspsmpbukkit-ironchests-30/

DOWNLOAD the auto-installer, unzip and run the ‘Glixyl Installer.jar’ (nevermind the ‘needs a fresh copy of minecraft as I have tested it copies just fine over)

Follow the instructions in the Glixyl Auto-Installer v0.2 post below if you get lost.. I believe this will be the final Minecraft 1.1 installer released until all the mods we want are available for Minecraft 1.2.3 and above.

— If you need to downgrade, it is a matter of simply changing a configuration file setting so no worries if you run this auto-installer for the upgrade.

CraftGuide / QuickGuide – hit ‘G’ while in game to see all recipes possible (don’t need to create the craftingguide book.

CraftTable II – This advanced crafting table can create any item in your recipe list if you have the contents in your inventory > http://www.minecraftforum.net/topic/856538-11-crafting-table-ii-v162-310112/

BuildCraft – Advanced building, mining, farming and structures including pipes and motors of all types > http://minecraftbuildcraft.wikia.com/wiki/Minecraft_Buildcraft_Wiki

IndustrialCraft II – Uranium, Rubber, Tin, Copper, Lasers, Nanosuits and tons of other cool technologies including ability to LOCK YOUR CHEST. >

PowerConverters – A bridge between the Buildcraft and IndustrialCraft mods > http://www.minecraftforum.net/topic/119361-110-tehkrushs-mods-all-mods-updated-and-plasticcraft-smp/

Optifine – FPS improvements and graphics enhancements.  You don’t need to use MC Patcher to have HD textures

IronChests – interactive display chest compatible with BC and IC2 objects